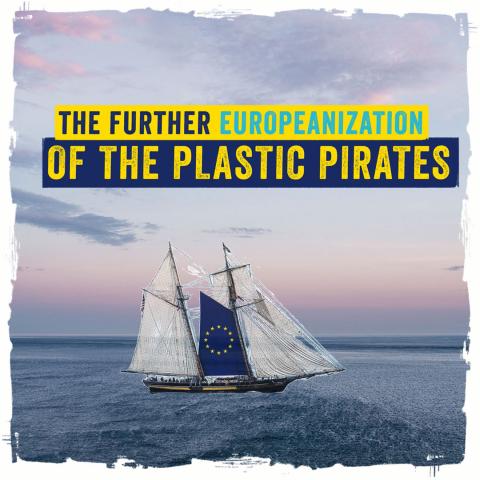 “Plastic Pirates – Go Europe!” expands to even more countries in Europe with the support of the European Commission
Date of Publication:
19 August 2022

In autumn 2022, synchronized samplings of plastic waste will take place in eight more European countries beyond Portugal, Slovenia and Germany. Hundreds of additional young students will be given the opportunity to become scientists and help gather data on plastic waste pollution in European rivers and waterways. This further Europeanisation of the initiative is funded by the European Union as part of the EU Mission to Restore our Oceans and Waters under the Framework Programme for Research and Innovation, Horizon Europe. DLR Projektträger is coordinating the scale-up of the initiative via local partners in the participating European countries.

Funded by the German Federal Ministry of Education and Research, the initiative was first developed by the Kiel Science Factory and rolled out to all of Germany with the help of the Ecologic Institute from 2016 to 2019. During the German Presidency of the Council of the EU in 2020, Portugal and Slovenia joined the initiative and continued to promote the Plastic Pirates during their Presidencies in 2020 and 2021. With 700 schools reached and more than 15.000 students having participated in the samplings in three European countries, the European Commission decided to support the further Europeanisation of the initiative via a 30-month Action.

Starting in June 2022, DLR Projektträger has the task to roll-out the initiative all over Europe. Among others, the expected impacts of the Action are to

Austria, Belgium, Bulgaria, Greece, Hungary, Italy, Lithuania and Spain have already agreed to join the initiative in 2022. Starting in September, local partners of the Plastic Pirates initiative in the participating countries will reach out to schools and youth groups to mobilize young students to participate in the initiative. From mid September until November 2022, the plastic waste samplings will take place and vast amounts of data on plastic pollution in European rivers and waterways will be gathered. The results will be analysed by local researches and shared with scientists across Europe.

The “Plastic Pirates” is a citizen science initiative aiming to raise awareness of rivers as common and important natural resources that we need to protect. Every day, large amounts of plastic waste enter the oceans and seas via rivers, endangering animal and plant life and damaging the regulating role of the oceans. Yet, there is a lack of information and data on pollution from plastic waste, such as the potential sources of litter, the different types of plastic at riversides, the amount of microplastics and macrolitter in the river, and the factors that influence this amount (such as population density). The Plastic Pirates address this issue, training school classes and youth groups to determine and map the amount, type and sources of plastic waste at and in rivers throughout Europe. The data is then professionally analyzed, uploaded to an online map, and made available to the scientific community. The more countries that join the initiative, the more comprehensive and useful this data becomes.