Since the start of the Plastic Pirates in 2016, more than 15.000 children and young people have collected data on riverine pollution at more than 900 locations in all 16 German federal states. The majority of the data come from the Rhine and its tributaries, followed by the Danube, Elbe and Weser. However, smaller watercourses such as the Ems, Peene or Oder were also investigated by the plastic pirates.

Parallel to the ongoing field samplings by participating schools, the team at the Kiel Science Factory is continuously validating data from previous sampling periods. The data and corresponding analyses are published in peer-reviewed scientific journals. This is very important to make the results accessible to the international research community. So far data and analyses on litter from the riverside of the years 2016 and 2017 (litter composition, litter accumulation and litter sources) is published in the journal “Environmental Pollution” (https://doi.org/10.1016/j.envpol.2018.11.025).

Not all of the data presented here have yet been conclusively verified and therefore serve as an preliminary overview.

Litter quantities and composition of litter on the riverside (Group A, formerly Group 2)

To evaluate the litter on the riverside, 513 sites were sampled by the participants. In total, the Plastic Pirates identified 15,566 pieces of litter covering 32,097 square metres of riverside. This means an average of 0.48 pieces of litter per square metre. In other words, a classroom with a size of 50 square metres would comprise 24 pieces of litter. However, there were differences between the river systems: The total amount of litter was found to be higher at the Elbe and Rhine and comparatively fewer items were found at the Danube and Weser. 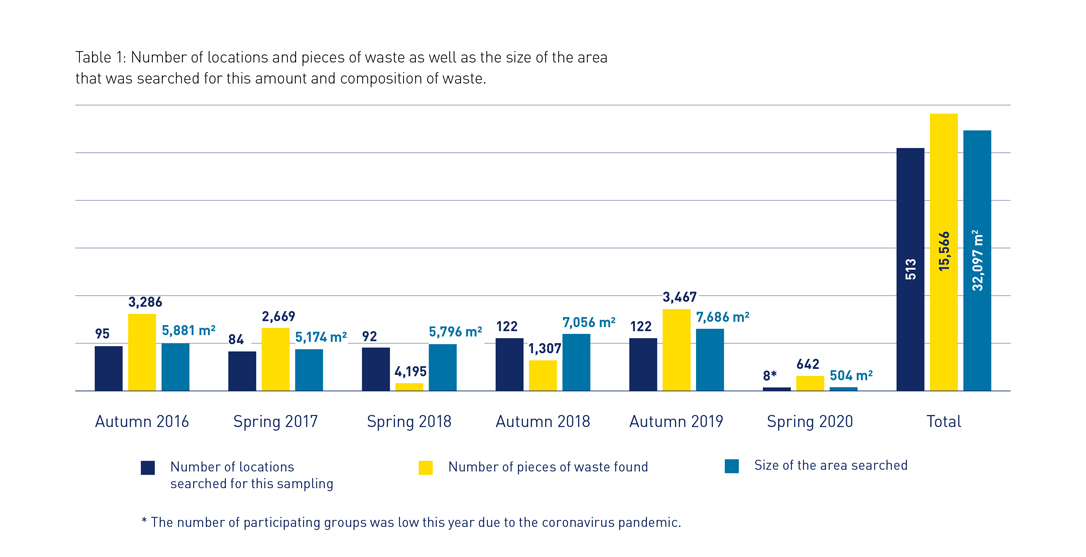 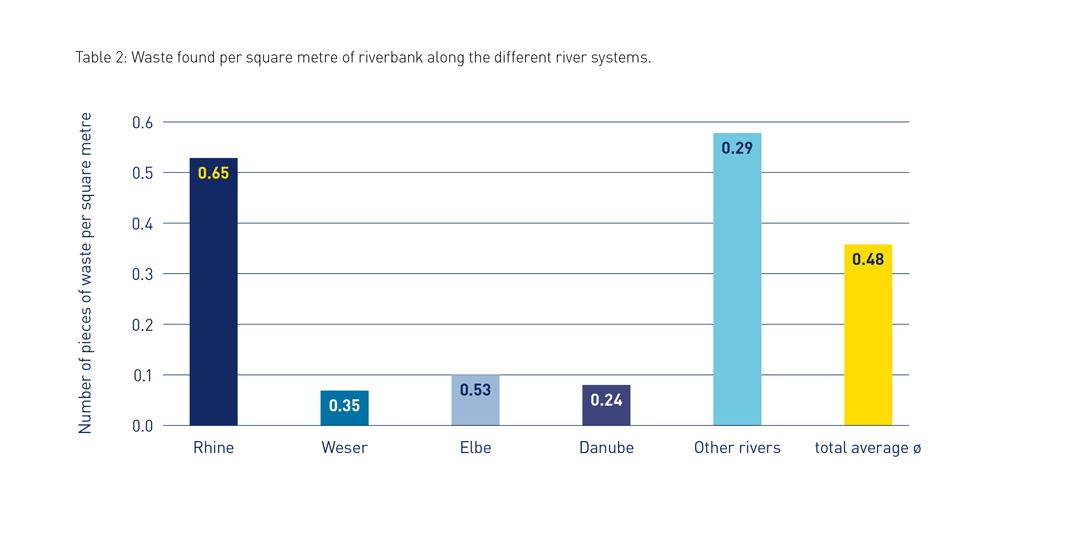 Most of the litter found by the children and young people was plastic (27%), followed by cigarette butts (24%), glass (21%), pieces of paper (12%) and metal (8%). Other items, such as food scraps, made up 8% of the litter found (see Figure 1). The type of litter found varied between the examined river systems. While in the Weser plastic was the dominant litter type, the rivers Elbe, Rhine and Danube are equally dominated by cigarette butts and plastic. Furthermore, a considerable contribution to the total litter in the river Rhine came from glass (see Figure 2). 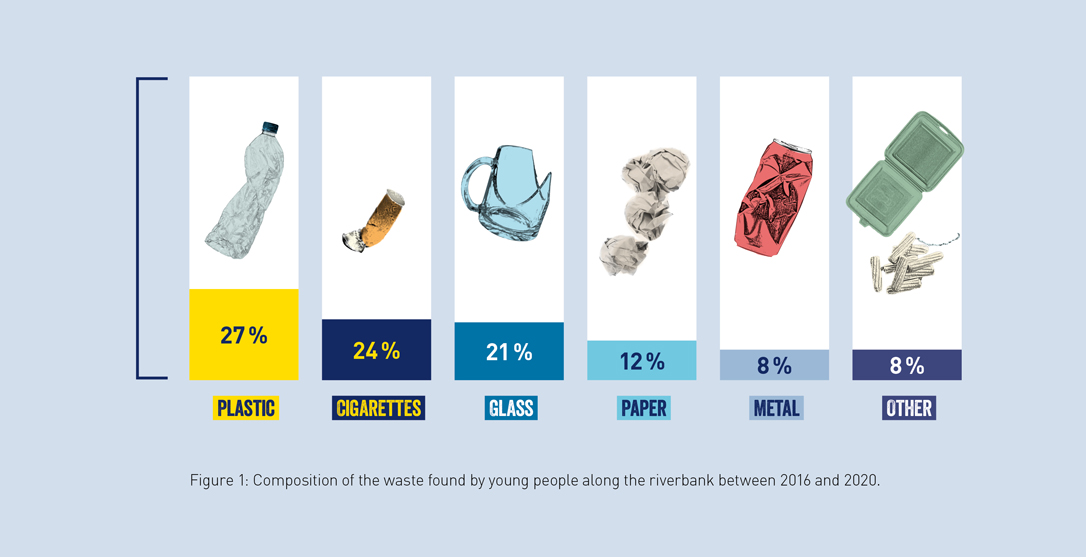 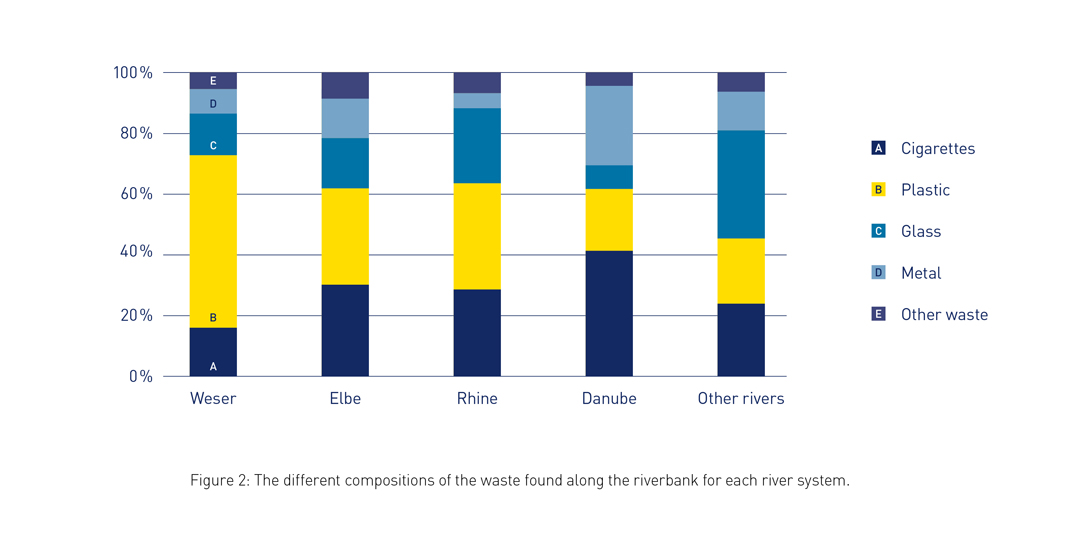 The participants also looked for potentially dangerous materials such as broken glass, sharp metal objects, used hygiene articles or chemicals. In total, data from 479 groups were analysed. 89% of the groups found dangerous material during their exploration. Glass fragments were found most frequently (at more than 71% of the sites), followed by sharp metal objects and used hygiene articles. Rotten food scraps (43%) and chemicals (23%) were found less common (see Figure 3). 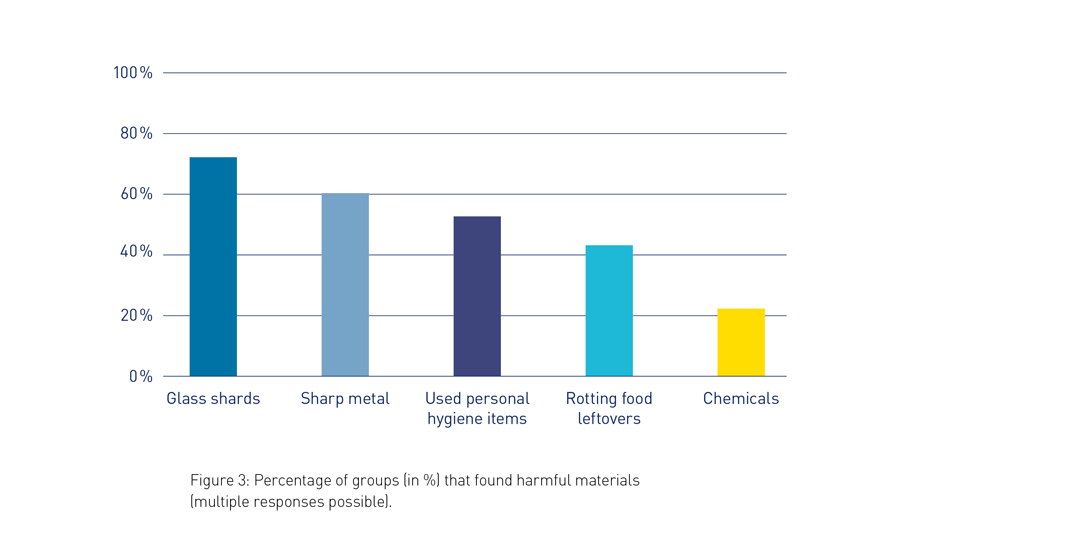 Disposables on the riverside (Group B)

From summer 2021, a ban on certain single-use plastic articles will be introduced within the EU. In order to obtain information on whether and how much single-use plastic is actually located at the riverside, the Plastic Pirates investigated these litter objects in 2019 and 2020. In total, the participants surveyed 130 sites for litter diversity along the riverside and collected and identified 26,974 pieces of litter along the riverside. Of these, 16% consisted of single-use plastics, such as packaging material from sweets, as well as plastic bags. Wet wipes and plastic coffee lids were also found by the plastic pirates. Plastic bottles, cups and single-used cutlery made up about 5% of the total disposable waste found at the river. Cigarette butts (33% of the total litter found) and broken glass (21%) were found more frequently. Paper (13%) and bottle caps (9%) were also among the many items found. 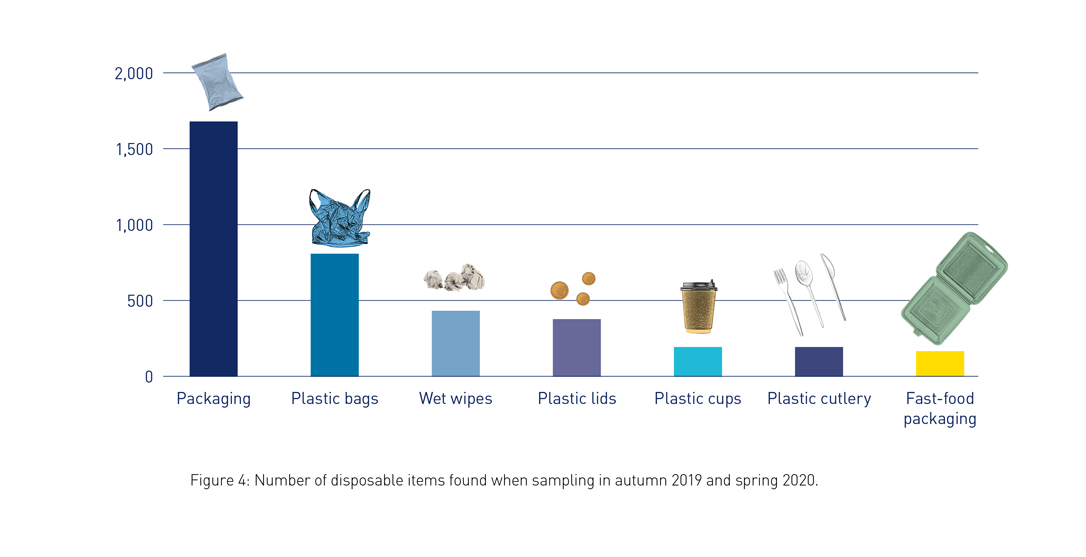 In this group, data from 520 sites were analysed to identify larger pieces of litter floating on the river surface. As a result, a total of 1,354 pieces were identified by the children and young people. On average about 3 pieces of litter drifted by per hour. However, the data recorded here can only be regarded as a minimum: Particularly large and wide rivers could not be completely surveyed by the school and youth groups. Furthermore, litter that accumulated on tree branches or at dams is not considered here and was therefore often difficult to identify. Considering the identifiable objects, most of the floating litter consisted of plastic.

According to the participants, most litter was caused by recreational visitors as the most likely source at 88% of the 490 sites. This was evident from the large number of food wrappers, cigarette butts and leftovers from picnics and barbecues (e.g. plastic cutlery, plastic bags, barbecues and charcoal left behind). Local residents were identified as the most likely source at 41% of sites, followed by accumulation due to river flow (30%), illegally dumped litter (28%) and litter generated by boat and ship traffic (13%). Industrial sources were identified as a potential source of litter by 9% of the groups (see Figure 5). As this assessment is often subjective, photos were taken by the children and young people so that the source of pollution could subsequently be verified. 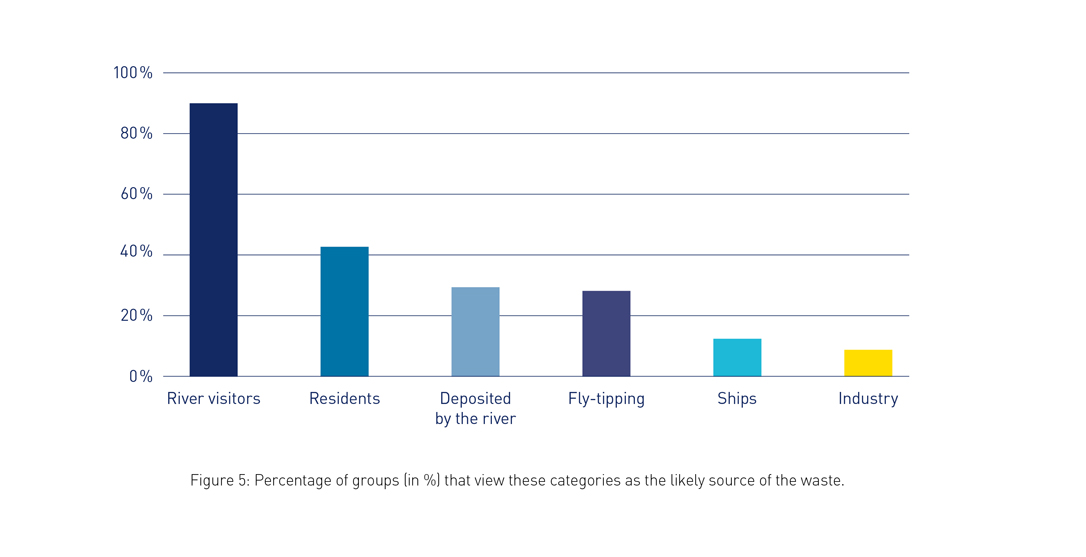 The research of the plastic pirates shows that more than 50% of the litter found on the river banks consists of plastic and cigarette butts and thus, due to the long decomposition time as well as the toxic effect, also endangers the ocean. The fact that the litter found is not only an environmental problem, but also potentially dangerous for humans, is shown by the findings of hazardous materials discovered on almost every riverside. However, some groups did not find any litter at all and have sometimes expressed their disappointment about this. But this is of course the best result!

Furthermore, river visitors have been identified as the main source of larger litter items. Therefore, it is important to encourage a change in consumer behaviour: buying less plastic also means that less plastic ends up in the environment. A first step in this direction is the new EU directive prohibiting certain single-use plastic items, some of which were also found on German riverside (e.g. single-use plastic cutlery, which will be banned from production and sale in the EU from July 2021).

Overall, the number of participants was impressive: since the start of the project in 2016, more than 15,000 young people have taken part in the project. They have completed the long journey from learning about the Plastic Pirates method to data collection and evaluation, and finally submitting the data sets and samples. We are very proud of this achievement. Without the help of the young researchers, this project would not have been conducted. Under normal scientific conditions, it would have taken years to collect data with this enormous spatial distribution. The children and young people have made an important contribution to researching the pollution of German rivers and thus, a valuable input to the protection of rivers and oceans worldwide.