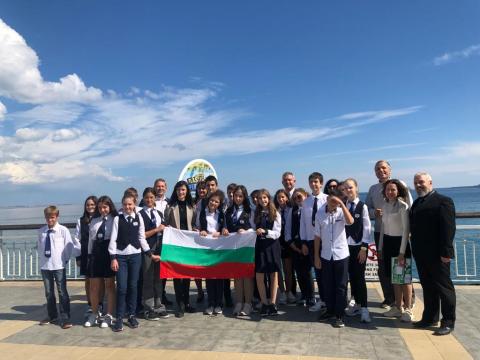 Burgas/Bulgaria, 23 September 2022. Mariya Garbiel, EU Commissioner for Innovation, Research, Culture, Education and Youth kicks off the Europeanisation of the Plastic Pirates – Go Europe! citizen science initiative in Bulgaria. After visiting the “Alexander Kodzhakafaliyata” school, Commissioner Gabriel will join the Plastic Pirates sampling at the Black Sea cost of Burgas together with 25 students of the school’s Planet Eco Club and the Bulgarian Plastic Pirates team from Burgas Free University.

Commissioner Gabriel’s visit of the Plastic Pirates sampling event in Burgas marks the beginning of the further Europeanisation of the Plastic Pirates initiative to eight additional European countries. Bulgaria’s kick-off sampling will be followed by Austria, Belgium, Greece, Hungary, Italy, Lithuania and Spain. Hundreds of additional young students will be given the opportunity to become scientists and help gather data on plastic waste pollution in European rivers, oceans and seas.

Local partners of the Plastic Pirates initiative in the participating countries will reach out to schools and youth groups to mobilize young students to participate in the initiative. From September to November 2022, the plastic waste samplings will take place and vast amounts of data on plastic pollution in and along European rivers, oceans and seas will be gathered. The results will be analysed by local researches and shared with scientists across Europe.

This further Europeanisation of the initiative – beyond Portugal, Slovenia and Germany – is funded by the European Union as part of the EU Mission Restore our Oceans and Waters by 2030 under the Framework Programme for Research and Innovation, Horizon Europe. DLR Projektträger is coordinating the scale-up of the initiative via local partners in the participating European countries. For further information on the Plastic Pirates – Go Europe! citizen science initiative please refer to https://www.plastic-pirates.eu/en (English) and  https://www.plastic-pirates.eu/bg (Bulgarian) or follow us on Twitter, Facebook and Instagram.

Background Information: The “Plastic Pirates” is a citizen science initiative aiming to raise awareness of rivers as common and important natural resources that we need to protect. Every day, large amounts of plastic waste enter the oceans and seas via rivers, endangering animal and plant life and damaging the regulating role of the oceans. Yet, there is a lack of information and data on pollution from plastic waste, such as the potential sources of litter, the different types of plastic at riversides, the amount of microplastics and macrolitter in the river, and the factors that influence this amount (such as population density). The Plastic Pirates address this issue, training school classes and youth groups to determine and map the amount, type and sources of plastic waste at and in rivers throughout Europe. The data is then professionally analysed, uploaded to an online map, and made available to the scientific community. The more countries that join the initiative, the more comprehensive and useful this data becomes.